Finally, it was time to put some real colour on the Manta. I had finished off the interior painting before Christmas, so everything but the outside of the shell was painted. Now it was time for the exciting part - putting the final colour on.

Apprehension was with me in the morning before Lee and I started prepping the car ready for the colour as I have never achieved good results with spraying, but then I've always spraying with cellulose out of a rattle can. I've never sprayed more than a wing before and I'd never touched two-pack before either.

Saturday, the car was masked up although it didn't hold that well, I can highly NOT recommend B&amp;Q &quot;Finest&quot; masking tape (the blue type they sell). The shell was then primed with two coats of high build two pack primer. The primer went on pretty well, but as I found out whilst doing the white painting, primer is thicker than paint so it's a lot easier to apply. 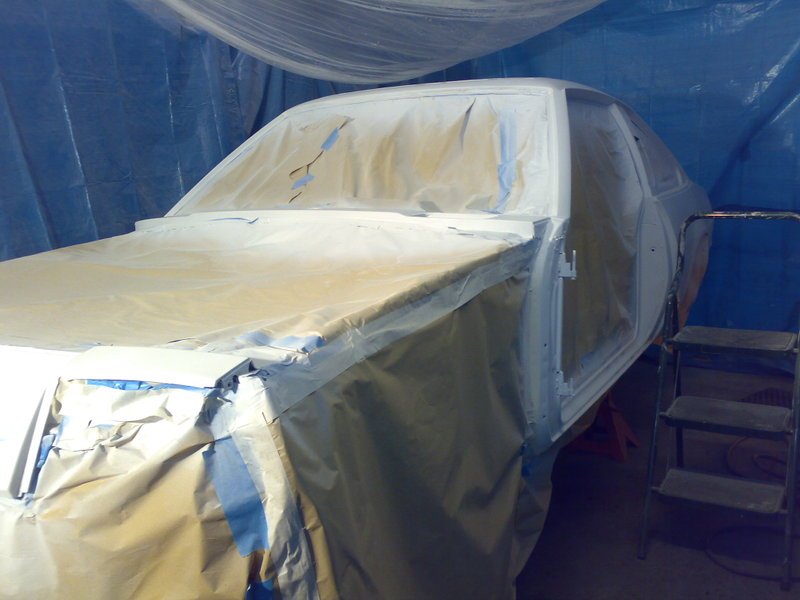 We started again on Sunday fairly early and it was here when the nerves started to emerge - what if it runs everywhere, what if I !*#@ it up, etc., etc.

We started off with Lee flatting off the primer with some 500grit wet and dry, and I re-did the a lot of the masking off using standard masking tape from a local motor factors. Then we blew off the dust, wiped over with some panel-wipe and then finally went over it with a few tack cloths.

Then came the moment of truth, Lee mixed the paint and we poured it in the pot. Lee set-up the gun to get a good level of paint and a good fan and then started on the first panel to show me how fast to be moving the gun, and also showed me how to plan each panel before squeezing the trigger! After the first panel was done, the apprehension had gone. A bit of the Manta was orange and looked amazing. I couldn't wait to get stuck in on the rest of the shell. Lee handed me the gun and it felt great to spray the colour on whilst Lee guided me along. It was easy to see where you had sprayed on the first coat, orange onto light grey primer was a good contrast.

Lee did the first couple of coats of orange on the roof because I found it awkward enough spraying other bits of the shell without needing awkward, hard-to-reach panels to spray too, but he made me get up there and do the final coat.

The shell had three good coats of orange, and with every coat the finish just got better as the confidence of how much paint could go on without running built up, and the depth of the orange deepened.

The photos are the only things that can show the how well the finish is from the gun, I think the Devilbiss GTi is the best tool I've ever bought and I'm very glad I did. And the number of runs I managed to put in the paint? None!! 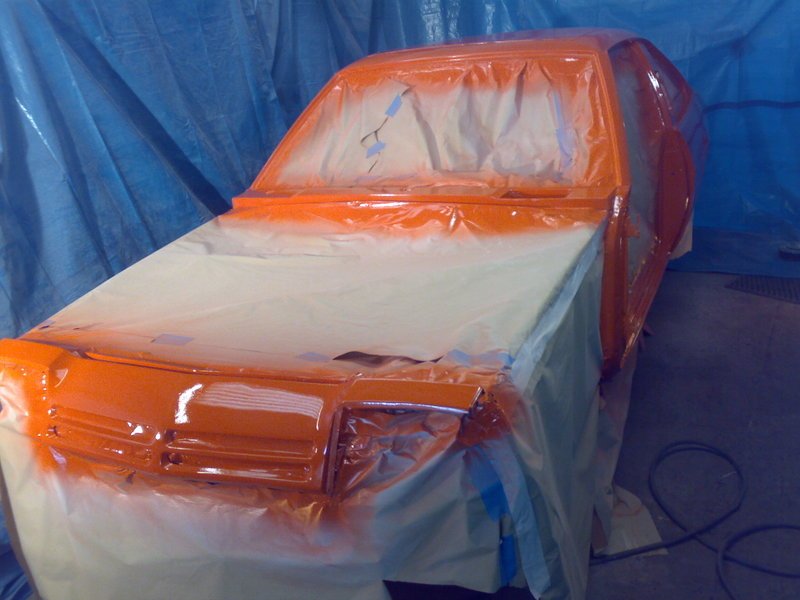 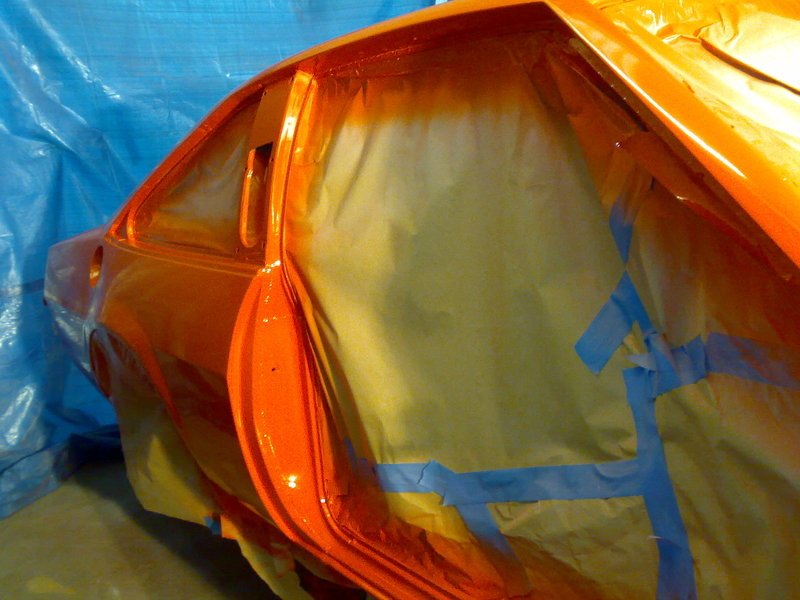 It's safe to say that Lee and I were like children on Christmas morning when we had finished spraying. I was dying to see the orange contrasting the interior. Most of the masking was done from inside, and after the final coat had gone tacky we just had to remove some of the masking to see what it looked like - Stunning!! 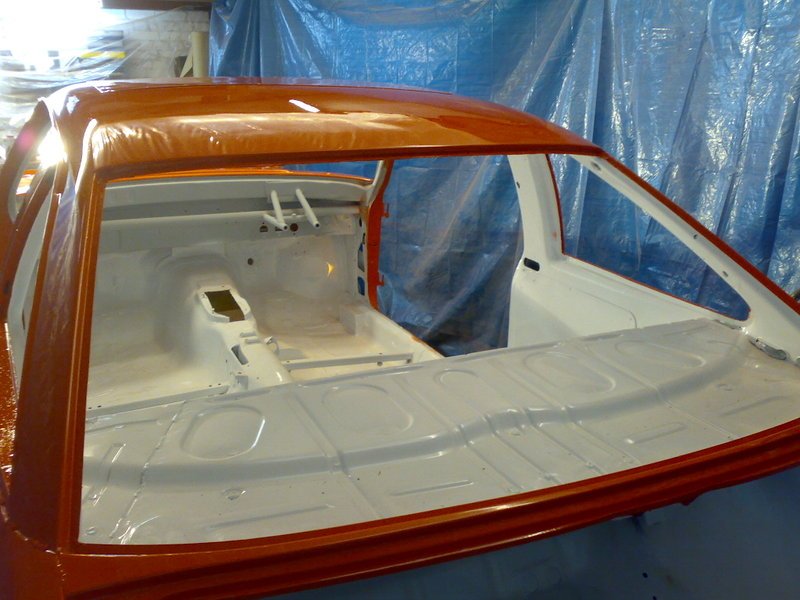 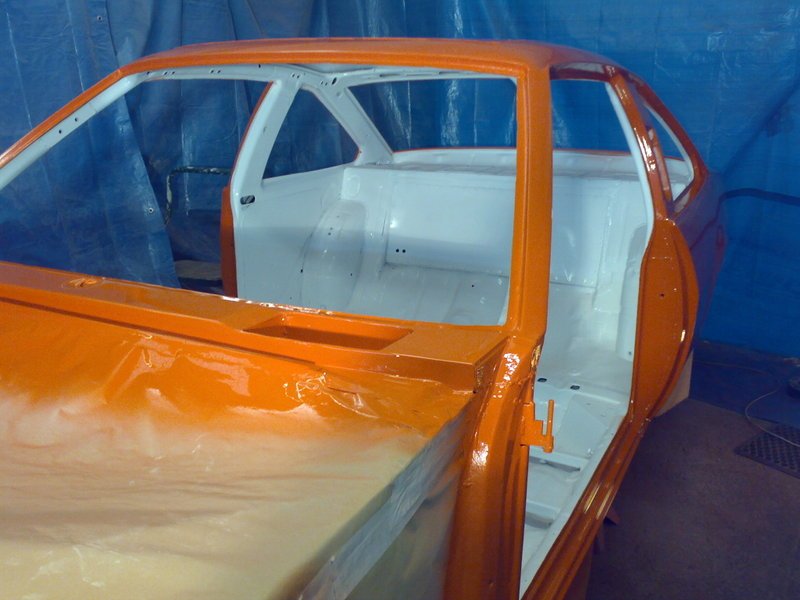 It's safe to say that without Lee's guidance you would most likely be looking at photo's of an orange floor and white Manta! lol. His help was awesome and now I can't wait to get on with painting the bolt-on panels...

...all this though, and I'll dent it on the first rally!