As the bottom end of the X25XE V6 has been sat around for a bit with the heads off, I thought I had best strip it down now and seal it up so that it can be rebuilt in the new year. Anything's better than just having it laying around getting dirt in the bores, waterways and oil galleries. I also want to make the dry sump pan on a nearly empty block, I'll just put the main caps and girdle back on to weld up the dry sump pan.

The flat 20XE flywheel fits perfectly on the X25XE crank: 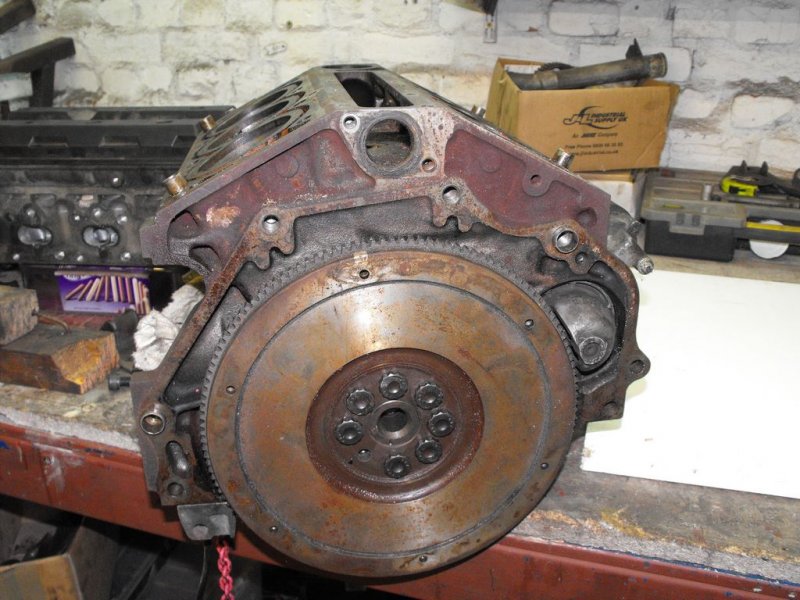 The bottom end of the X25XE with it's girdle on, the sump is mostly removed and the crank windage tray is removed: 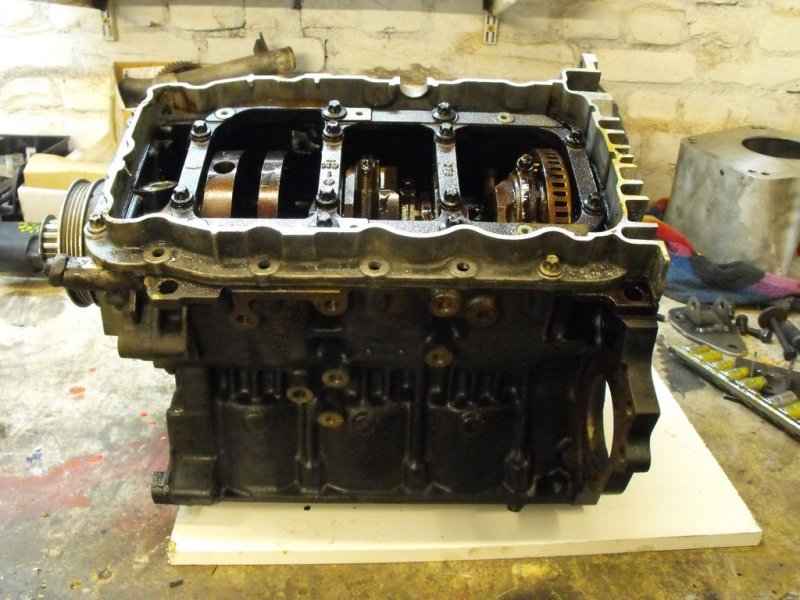 Photo of the girdle/main cap interface. It's probably a good job that there is a strong girdle strapping the mains as there are 6 cylinders and four mains! 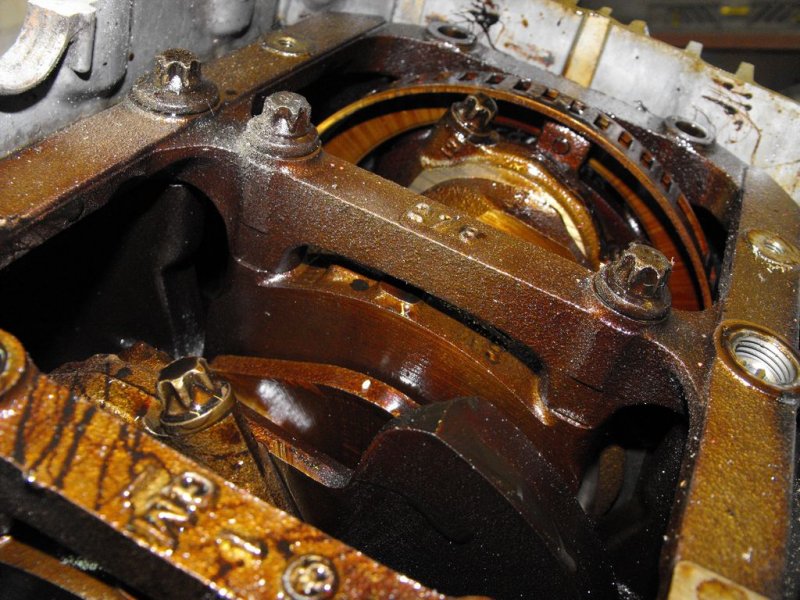 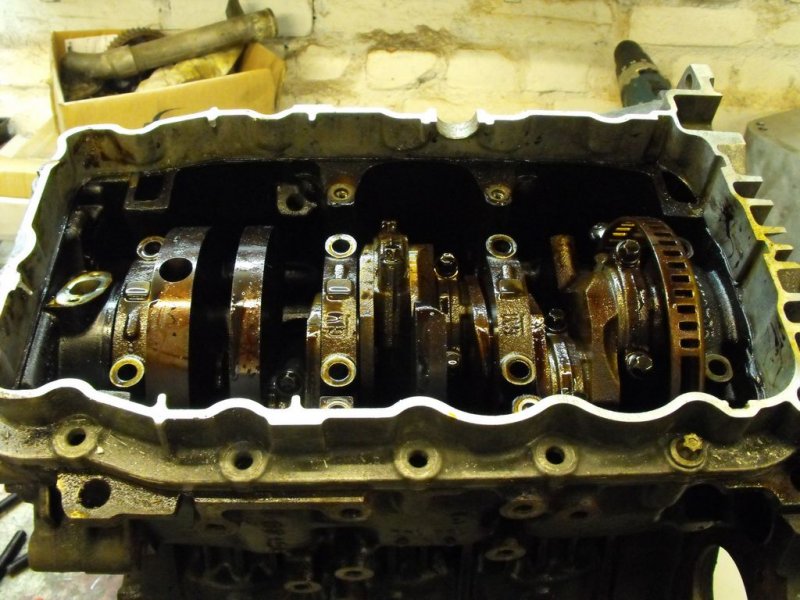 Which revealed a nasty peice of swarf on the block on the back of the crank sensor hole: 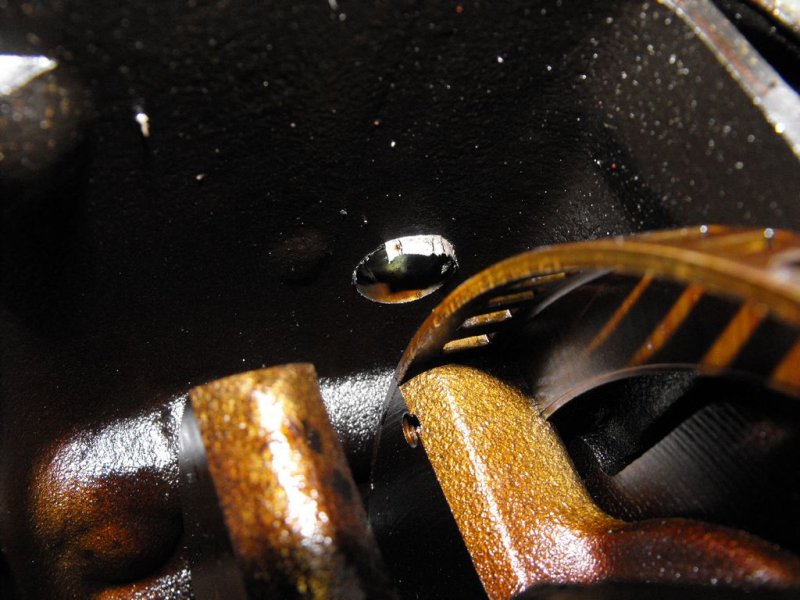 The swarf fell off as soon as I touched it.

The last person to rebuild this engine did the crank pulley FT. It took me, some heat, a 3ft breaker bar + extra extension to get the pulley bolt out. However, the woodruff key gave up first and sheared before the bolt made lots of noises and moved: 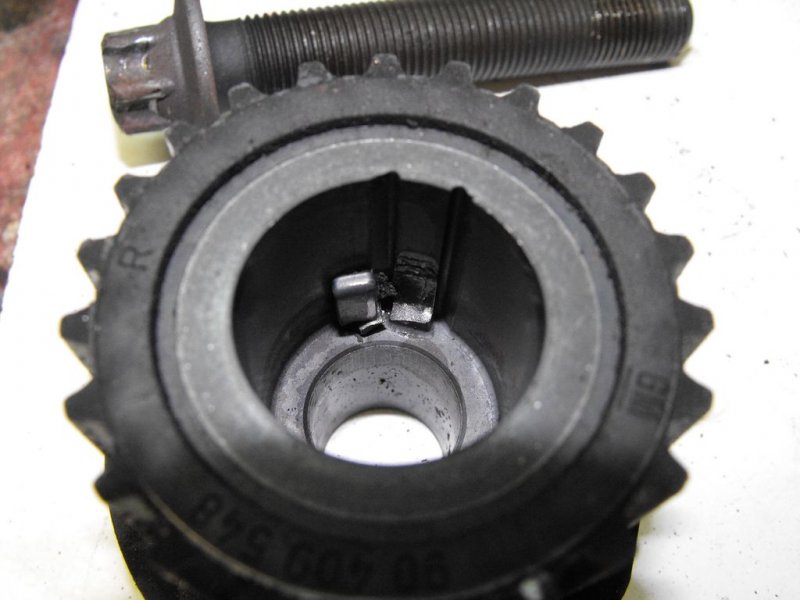 This in turn created a burr on the end of the crank which scored the crank thrust bearing, so a few bits to replace. The crank bolt was far too over-tight it was crazy, it just laughed at the nut gun. 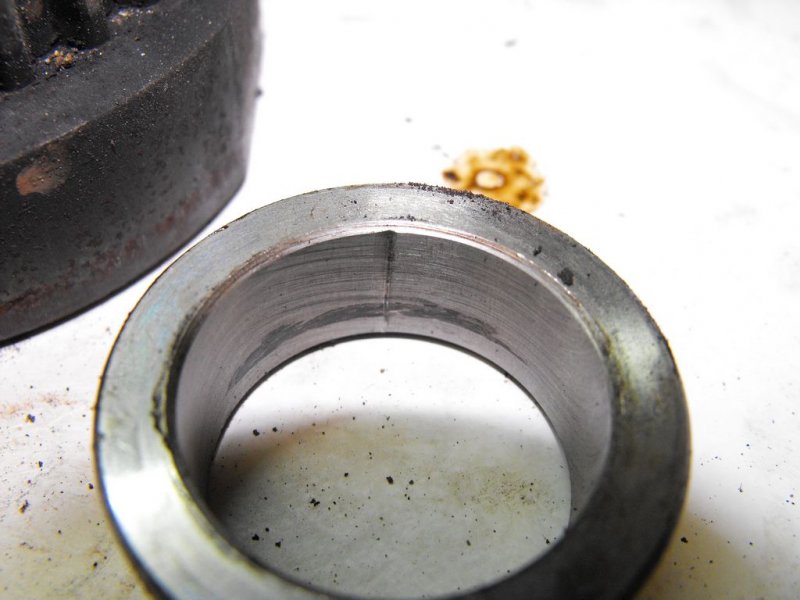 The X25XE Crank, with its huge counterweights: 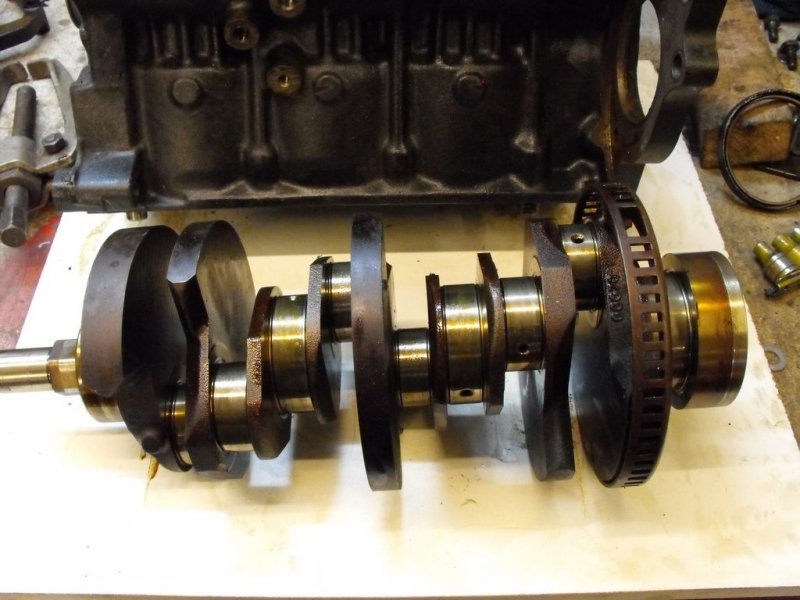 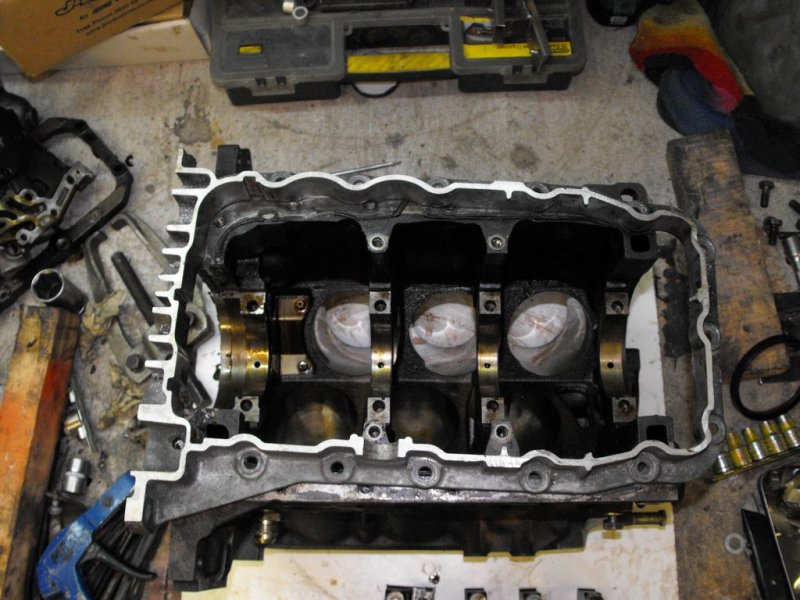 The oil galleries run across the block from the front of the engine to the rear taking various deviations on the way. The oil exits the pump and into the lower gallery hole in the photo: 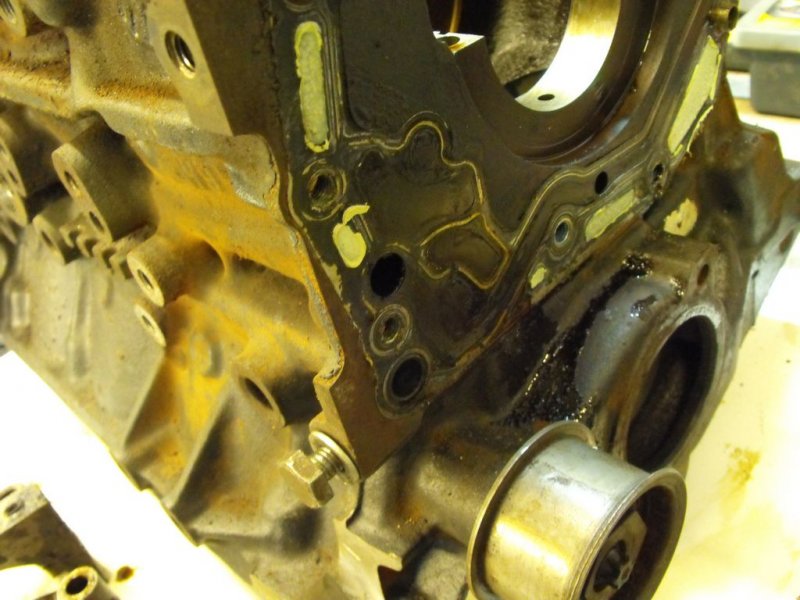 The gallery from the oil pump then comes out the threaded hole to the right of the oil filter in the photo below. This goes off the oil/water heat exchanger (Which I won't be running) and return from there into the -10 JIC fitting to the left of the oil filter. This feeds straight into the outside area of the filter, which includes a pressure releif valve incase the filter gets blocked - this is probably designed to operate before the filters own pressure releif system which are generally flawed by the fact that when they releive, they push all of the previously filtered out debris straight into the main oil gallery feed! D'oh! 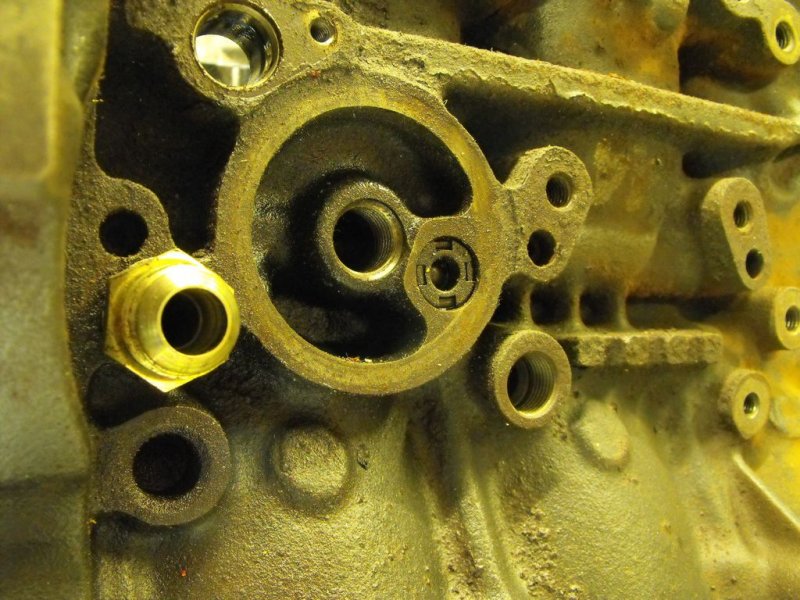 Me and Lee also took the T5 apart to check out the gearset. It was a bit fiddly because we started off without consulting the manual, but it only took 10min of headscratching or so before we sorted it out. The gearset looks in good condition, and looks to have been rebuilt fairly recently, which reflects what the previous owner told me. 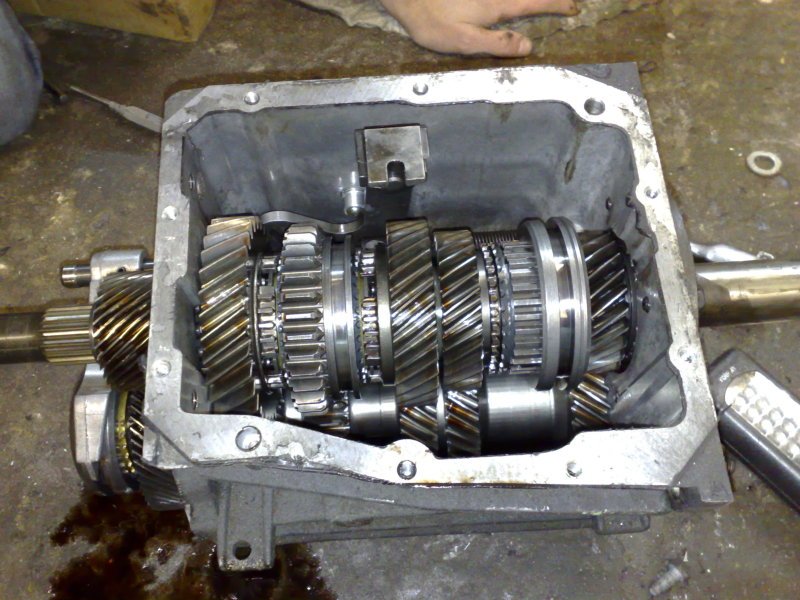